Ava Zevop | In the Beginning, There Was Static ... In the End, There Was the Webbed Wide World 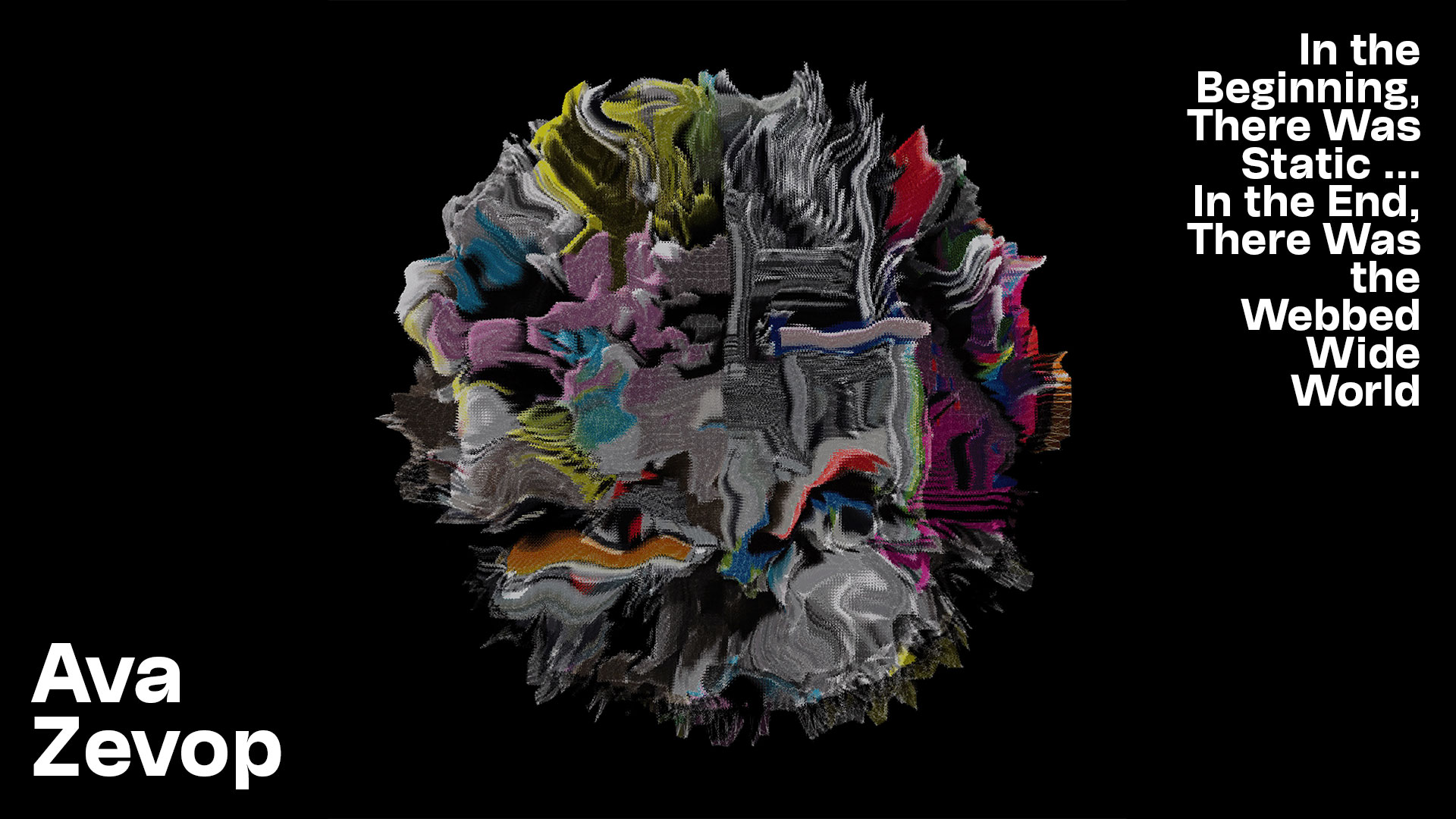 Guided tour of the exhibition:

The project is accompanied by Rosemary Lee’s essay “Artificial Interpretation”. The text will available at the exhibition and online.

In the Beginning, There Was Static ... In the End, There Was the Webbed Wide World by Ava Zevop explores how synthetic media complicate the relationship between the image and the world. The project traverses various media entanglement – from generated imagery and text, through visual datasets and the World Wide Web, to digital photography and analogue television – and explores how echoes of past visual media and technologies are reflected in the aesthetics and semantics of a new visual paradigm shaped by AI processes.

When reflecting on the evolution of human perception in 2006, Dr Fei-Fei Li, the founder of the first large-scale visual dataset ImageNet (2009–), pioneered the future of machine vision (the automated recognition of objects in the world) by envisioning the training of AI models by using a vast collection of annotated photographs that would “map the entire world of objects”. Such a Borgesian feat was possible precisely with the popularisation of digital photography, the proliferation of the World Wide Web and the rise of social networks.

Key in this endeavour were the vast amounts of digital photographs “collected” from the World Wide Web, which were then categorised into sets based on lexical databases (e.g., WordNet). The myriad of images was first annotated by remote crowdworkers via Amazon’s Mturk platform and later tagged by the users of web platforms. This categorisation of the visual inevitably flattens the meaning of individual images and mirrors the hierarchies in language to image-level relationships. This ambiguity can be seen in the unclear relationship between the prompt and the generated image or in the unusual machine interpretation of images.

In the Beginning, There Was Static ... In the End, There Was the Webbed Wide World is a series of four works designed as generative-interpretive loops, probing the techno-cultural entanglement that underlies and shapes the currently most used AI models for image generation and recognition. In addition to these models, in individual works, the project also uses image search as a reverse-engineering tool to explore the World Wide Web and datasets as specific “worlds of images” and “images of the world” in one.

The work Real-time poetically ties together two forms of noise: the noise of television, a fundamental building block of the past media “present”, and the “noise” of a diffusion model for the generation of images. The machine descriptions of television static serve as a prompt for the automated generation of image and text combinations. In the unit String, the abstract image act as a prompt that triggers a productive chain of (mis)interpretations. The image and its object are formed in a continuous transformation between the text, the generated image and pictures from the internet.

Noise uses random pixel arrangements to explore COCO (Microsoft Common Objects in Context, 2014–), one of the visual datasets on which the Craiyon model (formerly DALL-E mini) is trained. By exploring the dataset through image search, we can trace its historical depth and observe a specific period in the history of the Internet, which, as a material source of the dataset, also represents its aesthetic pivot. The work Flow connects all the models used in the project according to the time of their creation in a loop. The image is transformed into different visualisations of the textual designator while traversing the contemporary history of generative models.

Overall, the project opens reflections not only on the agents that shape the meaning of images but also on the “cartographies of new worlds” that are becoming a reality today with the creation and use of fully synthetic datasets for AI model training.

More:
Ava Zevop | In the Beginning, There Was Static ... In the End, There Was the We…
With:
Supported by: