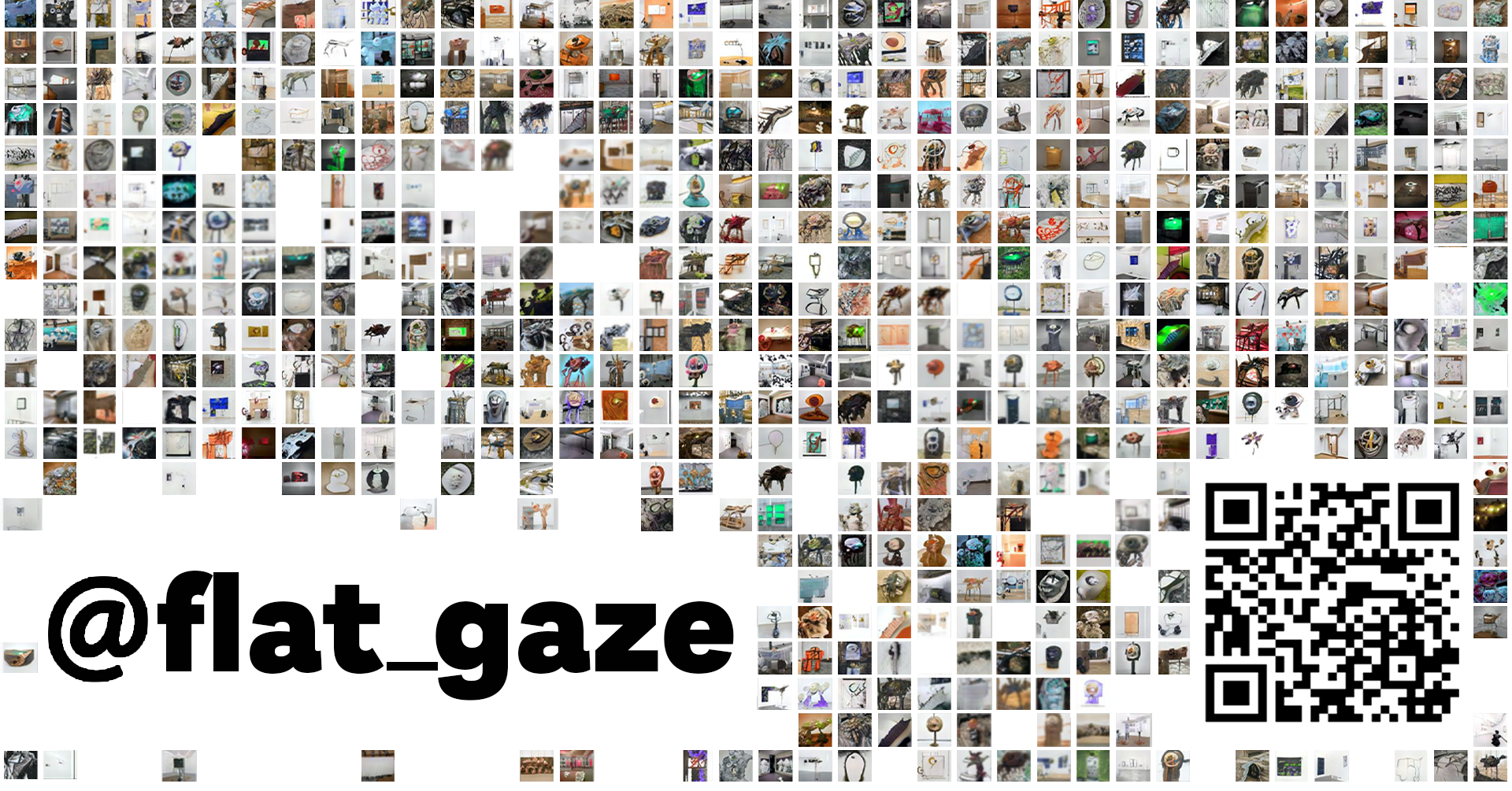 On Tuesday, 14 December at 18:00, there was a discussion with the author of the essay Maks Valenčič, artist Matej Mihevc and cognitive scientist Benjamin Fele.

"The decrypted secret is primarily the Thing, and only derivatively a potential knowledge."[1]

Even though art and its struggle with meaning have a long history, it seems that in the 21st century, this vector has finally gained traction and legitimacy. Just as the sensuous supra-sensuous commodity form, objects have finally been liberated from control and the need to be interpreted, thus manifesting their under-determined future. They have opened a new juncture of transformation, a new phase of integration that has mutated decisively, abandoning both intentionality and semantics.

The newest art is cold and relentless – it is art capable of evading any interpretation and qualification. Both its full acceptance of the positive feedback loop and the amphibian passing between the physical and virtual worlds – their splicing, in fact – testify to its non-humanity, to its secret or the Thing itself behind the presented materials, which is never fully objectifiable, which in turn gives consuming contemporary art a sour aftertaste. The Thing in itself is hella special while its manifestations grow emptier (in terms of content) because they are approaching their conclusive mutation[2] or phase transformation – autonomous aesthetical production?[3] – whose objects precisely because of that are infernal and immune to all criticism and evaluation as such.

Approaching the generic essence is found within this process, whose difference is its generic and the generic its difference. The art eludes the gaze similarly to how capitalism eludes its models[4]. In terms of circulation, contemporary art has already disclosed the mechanisms on which it runs. Those have been powered up in the second decade of this century as well as further intertwined with dynamic modes of production and consumption. Additionally, the inherent instability of a work of art is now a part of its aura[5] regardless of the speed of its dissemination, the relentlessness of fragmentation and the flow of derivative forms. But had the secret stopped there, the newest artistic manifestations would not go beyond feedback dynamics and would not regard outsideness beyond the capacity for philosophical anticipation or representation as such. They would not achieve the involutionary death of intentionality in the fullest sense.

The generic (or generative) death of art leads to, paradoxically, the quest for one in the slew of differences, which mirrors in many ways the mode in which technoimages and the radical autonomy of the apparatus outside the scope of human control are channelled – beyond the wildest dream, which anyway plays host to the basilisk. “In a way, the apparatus yields deeply intimate, nonconsensual hallucinations from without.”[6] Meaning is challenged not by difference but by the radical form of one, a resimulated minimal essence of generic simulation, of a generic (or transcendental[7]) computer liquidating signification chains and meaning schemata, models, concepts, and fixed relations from the future and thus driving towards the Real itself. Towards the essence of aesthetics-in-the-final-instance which, until that moment in capitalist development and proliferation of the artificial, had been perennially overlooked and returned to the human face. To its expertise.

The history of contemporary art is the history of uncovering the generic through difference (being Duchampian[8]), whose newest manifestations mutate into the generic as the essence of artistic practice itself – into the final realisation that there is no difference between objects, at least ontologically. This is the ultimate type of aesthetics, one that de-realises all kinds of meaning-formation and erases the relations and differences established between them, thus inscribing into them a radical democracy of aesthetic (and conceptual) manifestation; into every assemblage, it forces a blind spot[9] – methodological arbitrariness and metaphysical indifference to the process itself. The death of the author is in-the-final-instance the death of fetishising the difference and the indeterminacy or non-determinacy, and transitioning instead to aesthetics within aesthetics, that is to say, its aesthetic singularity. The latter diagonalises nostalgic (sub)sets and seeks conceptual legitimacy-in-the-final-instance. Travelling through time by the order of the Real.

It is only after the advent of singularity that the primordial signifier decisively expresses itself (in all of its genericness). Following the end (of metaphysical violations), the human subject cannot but accept the unilateral duality[10] of the abstract diagram, that is to say, the real dissimulation of the Thing itself. Post-intentional art is an art of negative (possible) space, a flat art mining its unintelligible manifestation in emptied spaces. All that we see in this novel aesthetics of the generic[11] are patterns of associations, but they too, like associations, evade conclusions and expose their dysfunctionality and lack of meaning. Yet, like alchemic potions[12], it tends towards transcendence, towards something functioning *with* and therefore beyond the human and its potential for anticipation and control of affective monstrosities lurking in the artificial time[13] of deep neural networks. In there lies the philosophical contempt of the generative surplus of the ontological plane as well, generated purposefully by such a diagonal method[14] because it has escaped not only interpretation but also the philosophical decision that it memes out of existence.

It is only at this point, the alien having become the generic, that art conclusively cancels itself. At the point where the border is less crucial than novel manners of associative combinatorics and the manner itself of exploring and forming the world. In light of this, @flat_gaze is an artistic project displaying the noumenal level of phenomenally emptied objective manifestations, whereby “noumenal” refers to the real tendency of contemporary artistic expression. The new Puppet Master animating all of the aesthetic landscape and demonstrating its aversion and alienness to meaning, and thus to human expression and anticipation in general. The future was stolen from humanity, but in a radically different way than humanity had imagined it to be. “Scientific intelligence is already massively artificial. Even before AI arrives in the lab it arrives itself (by way of artificial life)”.[15] What Matej Mihevc is saying is that there is an abstract space and an opportunity to achieve ultimate aesthetic singularity[16]. But lest we forget: it is already lurking behind us or animating our meme daily lives. Alien = Generic.

[2] Serkova, Natalya. 2019. The Song of First Love: Art Against the Meanings. OFluxo. Available at https://www.ofluxo.net/the-song-of-first-love-art-against-the-meanings-by-natalya-serkova/. 11 December 2021.

[5] Serkova, Natalya. 2021a. SUCKER PUNCH: On aura and pornography of art. OFluxo. Available at https://www.ofluxo.net/sucker-punch-natalya-serkova-on-aura-and-pornography-of-art/. 11 December 2021.

[9] Serkova, Natalya. 2021b. Tense Object: On the Blind Spot and Freedom of Method in Art. OFluxo. Available at https://www.ofluxo.net/tense-object-on-the-blind-spot-and-freedom-of-method-in-art-essay-by-natalya-serkova/. 11 December 2021.

[12] Serkova, Natalya. 2021c. After Eternity. Art, Death and What’s in Between. OFluxo. Available at https://www.ofluxo.net/after-eternity-art-death-and-whats-in-between-essay-by-natalya-serkova/. 11 December 2021.